​Third letter from scholars in the West on the Saudi War on Yemen, published in Counterpunch, April 1, 2016

On the occasion of one year of the bombardment and blockade of Yemen, we write for a third time as scholars of Yemen to deplore the actions of the governments you represent, which have served cumulatively to erase fundamental principles of international and international humanitarian law:

2 Attempting to protect Saudi Arabia and the other Coalition countries against condemnation by the UN Human Rights Council, leaving the Office of the UN High Commissioner for Human Rights alone to issue a condemnation of war crimes;

3 Continuing massive arms sales in the face of documented war-crimes by the Coalition;

4 Participating in refuelling warplanes, identifying targets, and facilitating the blockade of vital imports of food and fuel to Yemen. 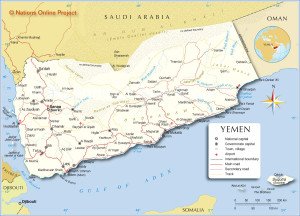 We are aligned with no party in the internal political divisions of Yemen and deplore human rights violations by all the warring parties. However, we note that the major targets of the Yemen war–the Houthis and the bulk of the former Yemeni army–have over the past years fought Islamic State and Al-Qa’ida which your governments view as terrorist groups and which have targeted Arab as well as European cities – most recently Brussels.

Against this background, we renew our call to you to do everything to obtain an immediate and complete ceasefire and the launch of unconditional Yemeni-Yemeni negotiations for the formation of a transition government. And we ask that you offer no cover to the attempts of the Coalition states to extract commercial gains from their war and to avoid, in the name of plans for GCC ‘reconstruction’ of Yemen, legal responsibility for war reparations.

Notes:
[1] UNSC Resolution 2216 was approved by the UN Security Council on April 14, 2015 with 14 votes in favour and one abstention—Russia. Here is the statement by Vitaly Churkin, Russia’s ambassador to the UN as reported by the UN press release: “Vitaly Churkin said his delegation had abstained because the resolution was not fully in line with what was required by the crisis in Yemen. The text failed to take into account proposals his country had made and to call on all sides to halt fire, did not provide for due reflection on consequences and lacked clarity on a humanitarian pause. There were also inappropriate references to sanctions [against leaders of the revolt against the Yemeni governing regime], he added, stating that the resolution must not result in an escalation of the crisis. He stressed that there was no alternative to a political solution and action by the Council must be engendered from already-existing documents.